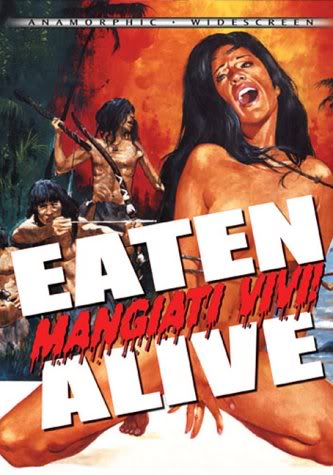 From the mid 1970s until around the mid 1980s, a slew of chiefly Italian Exploitation Films were made that are known as cannibal films, and are considered to form one of the most extreme subgenres of horror cinema. The premise for every film involves civilized, predominantly white protagonists venturing into remote South American/Asian jungles and encountering tribes of dark-skinned human-eaters. The tropes for these films are quite consistent, possibly because most of the films essentially ripped off one of three cannibal films that enjoyed financial success. These tropes include:

Other common tropes of cannibal films:

The most well-known and successful of these films was Cannibal Holocaust in 1980. It is also infamous for scenes of gratuitous animal death, among other things. Because of the infamy of this movie, cannibal films were among the many horror and exploitation films banned by the UK as Video Nasties.

Not to be confused with Cannibal Tribe, the general trope about savage tribes which kill and eat outsiders.