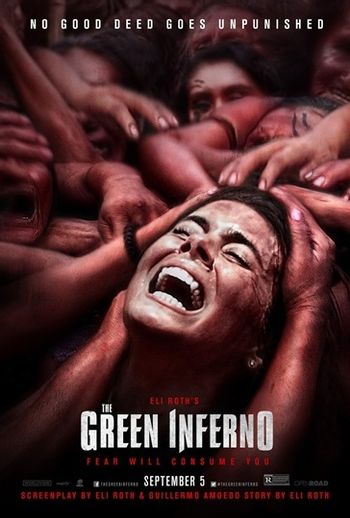 The Green Inferno is about a group of student activists who travel to the Amazon Rainforest in order to protest a logging company and soon discover that they are not alone, and that No Good Deed Goes Unpunished.

Eli Roth's love letter to the Cannibal movie genre of old. Notable for a delayed release,note The film premiered at the 2013 Toronto International Film Festival, but didn't get a release for two years due to production company Worldview's financial troubles. After a Distributor Hop from Open Road Films to Blumhouse Productions, it was released two years after its premiere. coupled with a press tour in which Roth singled out "social justice warrior" student protesters as his target.

Filmed on location in Chile and Peru with a local tribe.