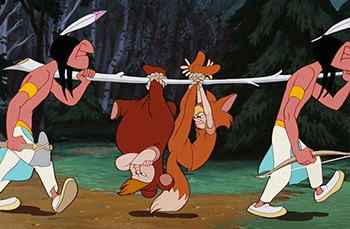 And this is why you don't dress up as animals, kids.
Advertisement:

A common Action Adventure Trope. Often part of the Cannibal Film genre, but not limited to it.

The protagonists are captured by some Hollywood Natives and brought to their village. Invariably, they will be taken away like mere game, arms and legs tied to a pole carried by a pair of tribesmen.

They are rarely gagged, though, so expect lots of grumbling about the discomfort or the whole humiliation of the thing.

A subtrope of Bound and Gagged. Contrast Captive Push, where they can still walk. See also Captured by Cannibals. Often preceded by Caught in a Snare, may be followed by Stewed Alive or Human Sacrifice if they're unlucky. If they escape, they can expect to be Chased by Angry Natives.

Not to be confused with Bridal Carry.