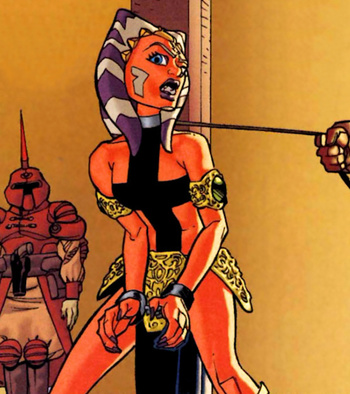 "It helps to have the damsel in distress in nice clothing, you know. Helps make the atmosphere."
— Negima! Magister Negi Magi
Advertisement:

In addition to being captured, a character (usually a woman) is found by the rescuers and seen by the audience in an embarrassing outfit (usually something revealing or stereotypically feminine); she casually spends the rest of the episode wearing it until she can escape. Not done so often anymore — possibly because of the sketchy nature of who exactly stripped her and forced her to wear such a thing, or because heroines now tend to have no qualms about showing a lot of skin — but it pops up in Science Fiction from time to time. The lite version where the villain tries to force-marry the heroine seems pretty dated too.

The male version of this is Shirtless Captives. A (usually) comic variation has the guy's buddies come in to find him strapped to the bed in his boxers, either because his captor didn't want him to have anything that could allow him to escape or because he was captured by letting the woman tie him up because she'd convinced him she was into bondage.

Overlaps with Bathe Her and Bring Her to Me if we see the captive being stripped, washed, dressed, and otherwise prepared for her captor. See also Sex Slave, whose default attire is probably this. Compare Ready for Lovemaking, Instant Cosplay Surprise and Bad Job, Worse Uniform, the latter of which also has a character being forced to wear an embarrassing outfit, but for humor instead of Fanservice. When the captive is stripped bare but no clothes are offered in turn, it falls under Shameful Strip. Overlaps with Undressing the Unconscious if the captive is stripped while unconscious.

After being captured by Jabba the Hutt, Princess Leia is forced to wear a revealing slave-girl costume.

After being captured by Jabba the Hutt, Princess Leia is forced to wear a revealing slave-girl costume.