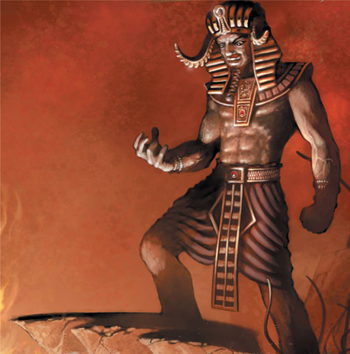 As far as Pharaohs go, you don't get more nefarious than Nyarlathotep.
"I am your enemy, O Pharaoh – you great monster, lurking in the streams of the Nile!"
— God, Ezekiel 29:3, The Bible

The other stock Egyptian-style villain, and a common boss in Shifting Sand Land, alongside the Mummy (which this guy is likely to become in death).

The appearance of this character is pretty recognisable. Chances are, you will see a striped head dress (called a 'Nemes'), some sort of ancient-looking robe or kilt, and a sceptre. And if the work in question isn't set in Ancient Egypt, the Pharaoh may be found sealed inside some kind of tomb or pyramid and will vow to curse any explorer who comes near, making the overlap with the Mummy even clearer.

See also Aristocrats Are Evil. Because Egypt is in North Africa, this trope can easily have Unfortunate Implications that, depending on the villain's skin tone, can overlap either with the Scary Black Man trope or with Orientalist stereotypes of cruel, decadent olive-skinned despots. Proceed with caution.

The Trope Maker, Trope Codifier, and Ur-Example is probably found in the Book of Exodus in The Bible, with that nasty pharaoh as one of the villains of the Old Testament, making this Older Than Feudalism. In fact, before World War II made Those Wacky Nazis the most popular shorthand for evil, comparisons to the pharaohs, along with other Biblical bad guys like Pontius Pilate and Judas Iscariot, were among the strongest insults

thrown at politicians, in a predecessor to Godwin's Law (with comparisons to Attila the Hun also popular).

Serpci, the pharaoh Boss Ghost, messes with Luigi and attacks him so he can't continue any further and rescue Mario.

Serpci, the pharaoh Boss Ghost, messes with Luigi and attacks him so he can't continue any further and rescue Mario.