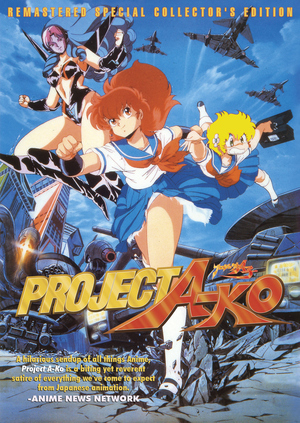 B-ko Daitokuji: A-ko, the depth of my vexation is beyond your comprehension!
A-ko Magami: Today I woke up early. This may never happen again! But you! You! Over a stupid, petty... B-ko, YOU IDIOT!!!
Advertisement:

Sometime in the future, Eiko ("A-ko") Magami — a teenage girl endowed with absurdly high levels of superhuman strength and speed — attends Graviton High with her bubbly and childlike best friend, Shiiko ("C-ko") Kotobuki. Also attending class is Biko ("B-ko") Daitokuji, a beautiful and mega-rich, tall Academic Alpha Bitch who is determined to win C-ko for her own. Unfortunately for B-ko, that means having to go through A-ko first. So each school day, B-ko attacks A-ko with all manner of Humongous Mecha and, eventually, a revealing purple battlesuit. Things become more complicated after an alien warship from the Lepton Kingdom (located in Alpha Cygni), manned by the mysterious Captain Napolipolita, descends upon Graviton City with the goal of capturing one of the girls—or rather, rescuing her, as she seems to be their long-lost princess.

A raucous blend of over-the-top screwball comedy, action, and science fiction, Project A-Ko was one of those films everyone saw during the infancy of the American anime community, notably because it was one of the first theatrically-released anime films that could not be considered an "arthouse" film to also receive a commercial release in The '80s. The general level of goofiness in the film is evident in the names of its main characters: "Girl A" (A-ko), "Girl B" (B-ko), and "Girl C" (take a wild guess). Another character is also named "D". But despite—or perhaps because of—that goofiness, the intervening years between its initial release and now have not lessened the influence of, and love/respect for, A-ko.

A-ko was followed by three movies which continue the story of the first film and an Alternate Continuity OVA series.

Together with AKIRA and Bubblegum Crisis, A-Ko was part of the initial wave of anime in the West that started the 90s anime boom. In spite of that, Project A-ko (プロジェクトA子) is a relatively obscure film series to later generations of anime fans, but it was and continues to be an influential work in regards to action-comedy anime with a female-heavy cast—including My-HiME and Kill la Kill, the latter of which could be considered a Spiritual Successor to A-ko in its own right due to similarities in tone and shared elements of both aesthetic and character.

Discotek Media currently holds the license in North America. Due to the original 35mm master print being believed to have been lost, they planned on instead using a promising AI-upscaling technology called AstroRes to restore the film for release on Blu-Ray... and then announced they were cancelling it because they had found the original masters, and were going to use that instead! This much-anticipated Blu-Ray, which includes the newly-restored version of the film and a ridiculous number of bonus features, ultimately released on December 21, 2021. In addition, as announced in March 2022, a remaster of the second film is set to follow later in 2022. The Series is hosted for streaming by Retro Crush.

Please go to the character sheet for all character-specific trope examples.

Project A-ko, its direct sequels, and A-ko: The VS include the following tropes: