Fighting from the Inside 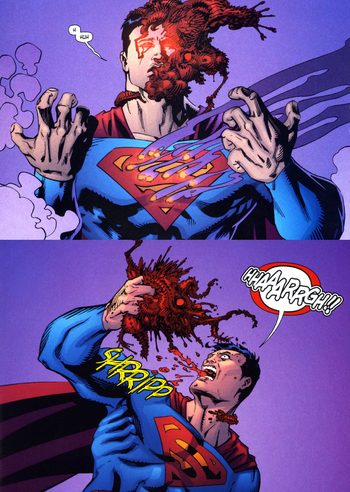 Seriously, Superman is the last person you should try to take control of.
"I keep the wolf from the door
But he calls me up
Calls me on the phone
Tells me all the ways that he's gonna mess me up
Steal all my children if I don't pay the ransom
And I'll never see them again if I squeal to the cops"
— Radiohead, "A Wolf At The Door" — Hail to the Thief.
Advertisement:

Fiction has a lot of ways of making otherwise good and decent people into stark raving evil lunatics against their will. And sometimes, horrifyingly, the original friend is trapped in their own body and helpless to stop "themselves" from hurting friends and loved ones... or are they?

When a character is Fighting From The Inside, they are resisting the controlling influence acting on them in subtle and sometimes overt ways. Maybe the Split Personality can't stop their hand from jittering uncontrollably as they aim a gun at the hero, or the brainwashing proves ineffective as they subconsciously sabotage their master's Evil Plan.

The character isn't just waiting for someone to yell "I know you're in there somewhere", they're trying their best to hinder the villains and show they can still be rescued with a little outside help.

Other signs of resistance are:

In a worst case scenario, these signs of resistance are the dying gasps of a fading soul trying to keep their body from being used for evil... they can't be rescued, and actually want to be put down. This may result in Dying as Yourself or Peaceful in Death, for your consolation after the death. In the best case, the villain will get impatient and resort to blatant means to help the mind control. That often proves to be a mistake with that physical stimulus being just what their puppet needs to break free and the physical fight is on, often with a Theme Music Power-Up to make it clear that the hero is truly back to normal.

For a milder version, where a character is trying to resist simple Mind Reading by filling their mind with opposing information, they're using Psychic Static.

See also Heroic Willpower, which may overlap if the controlling influence is The Virus or a Demonic Possession. Contrast with Possession Burnout. Not unusual for the Reluctant Psycho.

Megatron is not easily forced.

Megatron has been doping himself with the blood of an evil god, but when said god attempts to force Megatron's body to do his bidding, Megatron fights his own body every literal step of the way.

Megatron is not easily forced.

Megatron has been doping himself with the blood of an evil god, but when said god attempts to force Megatron's body to do his bidding, Megatron fights his own body every literal step of the way.