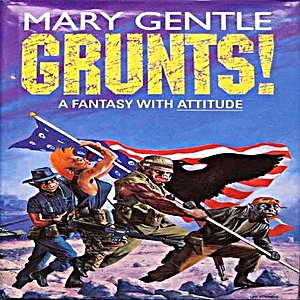 "Pass me another elf Sergeant, this one's split!"
Advertisement:

Grunts! is a a fantasy novel by British author Mary Gentle and originally published in 1992. It is told from the point of view of a band of Orcs (the titular "grunts"). It riffs on the ideas explored by Gentle and others in the anthology, Villains: Who Needs Heroes Anyway? published in the same year, writing High Fantasy from the perspective of the villain. At the time, this was a new idea in fantasy writing and Villains and Grunts! were considered pretty innovative for it.

Samhain is fast approaching and the Last Battle between the forces of Light and Darkness with it. Mighty armies and noble heroes gather. The Dark Lord's forces are legion and the wings of his dragons and wyverns shall blot out the sky. The forces of Light are outnumbered and full of reckless, headstrong heroes whose idea of tactical thought is discussing which way they're going to charge. They'll win, of course. And orcs, the poor dumb sword fodder on the frontline for the Dark Lord will die in droves. This is the way of things. So it has been and so it shall be.

Ashnak, a War Captain of the Agaku, is ordered by the Nameless Necromancer to steal powerful artifacts from a dragon's hoard. It turns out that said dragon is dead, and that the dragon with her dying breath cursed the hoard, to turn every thief into that which was stolen. The dragon was also the multiverse's keenest collector of weapons and militaria. Guess which US Military branch's equipment the orcs steal.

The novel involves a lot of Black Comedy, Refuge in Audacity, and generally reveling in subverting a bunch of fantasy and Hollywood war and action movie stereotypes. Gentle wrote the novel while recovering from injuries she suffered in a car crash, which caused chronic pain.

Tropes seen in this work include: