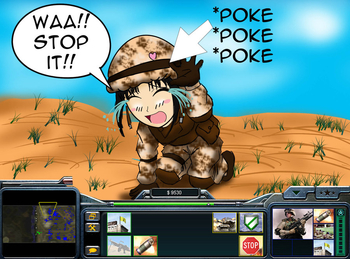 To win against the terrorists, don't poke your units.
Image

. Used with permission.
"Do that again and you'll pull back a stump."
— Alleria Windrunner, Warcraft II: Beyond the Dark Portal
Advertisement:

In games that have units vocally acknowledge when you select them, clicking too often can make them annoyed/sarcastic. Although a few games had used this trope earlier, Blizzard Entertainment is best known for using it in Warcraft: Orcs and Humans (the Trope Namer) and making it a standard feature of all their games; it has since spread to other companies and is now almost considered a mandatory feature for any Real-Time Strategy game. Because of the inherent nature of this trope, it is always a case of Breaking the Fourth Wall.

This is not strictly limited to mouse-clicking, but any repeated action (such as talking to a character) where the programmers thought to include an annoyed or comical reaction. For more general examples not related to multiple clicks/conversations, see What the Hell, Player?

See Torment by Annoyance for a similar trope not related to Video Games.