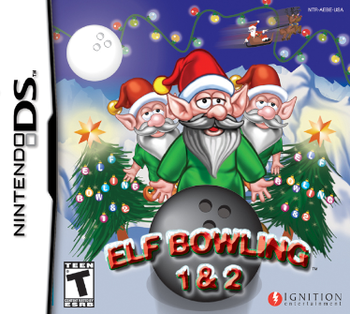 Elf Bowling is a series of freeware bowling games for PC. The original Elf Bowling was originally released in 1998 by NStorm for PC, with the second game being released in 2000. A compilation of the first two games called Elf Bowling 1 & 2 was developed by Black Lantern Software, published by Ignition Entertainment, and released in 2005 for the Game Boy Advance and Nintendo DS, to notorious negative reception.

The first game has you play as Santa Claus. Santa is apparently quite the bowler, and he is quite willing to use those whiny, snickering, union elves as bowling pins.

The second game has Santa and the Elves on a cruise ship heading to an island adventure. Santa's good-for-nothing brother Dingle Kringle joins up with them. This game is a strange shuffleboard tournament, and the elves are being used as the pucks.

A Direct to Video movie based on the games, called Elf Bowling the Movie: The Great North Pole Elf Strike was released in 2007. No, really.

The Movie contains examples of: