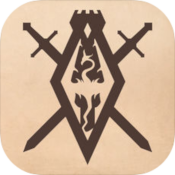 The Elder Scrolls: Blades is a free-to-play Action RPG published by Bethesda and set in the greater The Elder Scrolls universe as an Interquel set during the Time Skip between Oblivion and Skyrim.

Blades was designed specifically for mobile devices and is available on both Android and iOS with future plans to release on PC and consoles. It was released for the Nintendo Switch on May 14th, 2020.

There are three main modes of gameplay - "Abyss", where the player must attempt to get as far as possible in an endless dungeon and is useful for training. "Arena", which features Player Versus Player combat. And "Town", where the player can receive quests, interact with NPCs, and advance the game's story.

Combat is revamped here, where instead of the usual hack-and-slash, the player have to time the presses in order to successfully hit (or block) enemy attacks.

The Player Character is a member of the Blades, who have long served Tamriel's emperors as both a Praetorian Guard and Secret Police. Despite their heroic and legendary feats, the Blades have been outlawed, disbanded, slaughtered, and forced into exile as result of The Great War while being hunted down by the fascistic Thalmor of the Aldmeri Dominion.