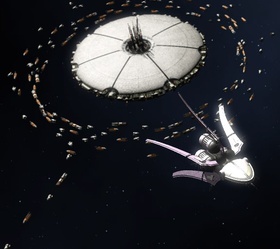 The Goddess Domina calls you to join her in the galactic core, home of the gods. Thus, you left your life behind and try to reach it. Of course, between you and the core, dozens and dozens of pirates, slavers, genetically-engineered humans, and other stuff are waiting to kill you.

Transcendence is a video game described by its creator, George Moromisato, as the fusion of NetHack and Star Control. You choose one of three starships to travel between systems, gathering things to upgrade your ships to survive the more and more dangerous enemies, and trying to make it out alive.

. The game is partly funded through the sale of expansion packs that tell further stories within the same setting, but the game client and the main scenario are both free downloads.

Do not confuse this with Ascend to a Higher Plane of Existence. Has nothing to do with the Johnny Depp film, either.