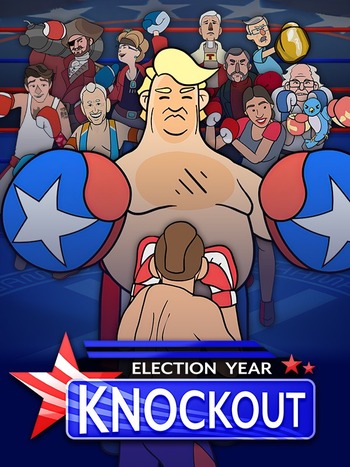 Punch-Out!!, but for politics
Election Year Knockout is a game that takes heavy inspiration from the cult classic game series Punch-Out!!. The game was developed and published by ExceptioNULL Games and released on July 2nd, 2020. The game is mechanically very similar to the Punch-Out!! series, however, instead of competing against various boxers in a professional competition to become champion, you are instead facing various political caricatures to become the president of the United States.
Advertisement:

The game is set in a universe where it is declared that instead of the president's being decided through elections, it is decided by who is the best boxer. You play as a Generic Guy who you can customize to your liking, and who is guided by a ghost named The Maverick in your quest to become the president of the United States.

After you beat all the main opponents and become the president of the United States, you unlock three bonus characters to fight, as well as EX versions of each challenger who seeks to take the presidency from you. Each opponent gets progressively harder, and each EX character ramps up the difficulty from their first fight.