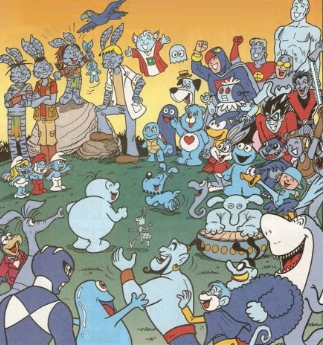 All the blue fictional people that could have been in James Cameron's Avatar.note On the top from left to right, going up: The Smurfs, Blu, Squirtle, Bloo, a Guardian of the Universe, a blue Care Bear, Huckleberry Hound, Inky, Buster Bunny, Sonic, Rosie the Robot, The Blue Falcon, Captain Planet, Blue Beetle (Ted Kord), Cookie Monster, Freakazoid!, Dr. Manhattan, The Roadrunner, Pocoyo, Aayla Secura, Stitch, and Nightcrawler. Center row: two

from the regular comic, Flik, The Blue Racer, Max Rebo. Third row: Gonzo, the Aardvark, a blue Power Ranger, the Genie, B.O.B., Gleek, a Blue Meanie, and Jabber Jaw.
Advertisement:
"Urk! Too many pop-culture references to be made! Brain overloading..."
— Deadpool, "Super-Showdown-Bowl!"

Any work where the Homages and Shout-Outs are too numerous to count. Basically, if there are enough references to make a Shout-Out sub-page, the work is overdosed.

Often these are fan works or comedies (goes triple if the series is a Long Runner), since it would be distracting to have so many of these in more serious works, save for comic relief moments.

But even in the appropriate works, how well this is done depends on most of the references being done well. If a work overestimates the audience's knowledge this might overlap to Viewers Are Geniuses. This sometimes works: those who are familiar with the references will enjoy it. The references can even turn into multiple Genius Bonuses. And those who are unfamiliar with it might be encouraged to look up more information about the reference in order to understand it. That way they feel challenged and rewarded for their effort and grow along with the creator. But in instances where too much stuff just flies over the audience's heads the general public could feel alienated and lose interest.

If a work mostly consists of stuff referencing other stuff the dangerous border to blatant Plagiarism and/or sheer uninspiredness might be crossed. The audience might even feel as if it's just watching/listening/reading a scene by scene rehash of other, more original works.

A Super-Trope to Speaks in Shout-Outs, which is where a single character within a work has this as a characteristic.

Compare Cast of Expies, Trope Overdosed, Pastiche, Fountain of Memes, Continuity Cavalcade. This can easily turn the work into an Unintentional Period Piece if most of the references are to contemporary, ephemeral topics.