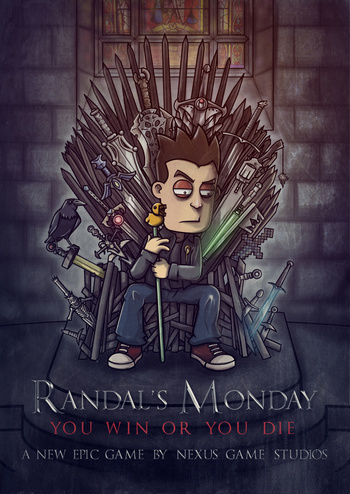 Randal's Monday is a point and click Adventure Game from Nexus Game Studio, and published by Daedalic Entertainment in 2014 for the PC and PS4. The game follows Randal Hicks, a good for nothing guy with kleptomania who steals his best friend's wedding ring and pawns it off for cash to pay rent, only to find said friend has killed himself not long after. Even more unfortunately for everyone involved, that ring is some sort of magical artifact that has trapped Randal in a "Groundhog Day" Loop, where he relives the same Monday over and over. Somehow, he must find the ring again and stop the loop, while also making sure his best friend doesn't kill himself by the end of it.

The game styles itself after old school point-and-click games, specifically from the LucasArts library, but has comedic sensibilities more in line with a modern adult comedy, even copying a rather ugly art style shared by the likes of Family Guy. It rapid fires jokes and one-liners, but the interesting thing here is the time loop premise isn't a normal one. What Randal does in one day does carry over into the next, but the world is rewritten by the ring and gives everyone but Randal new memories. Every single Monday is different than the last, and it uses it to unexpected effect throughout the game, even down to casting the finale during the apocalypse, caused because of how many times the ring has changed reality. It's also loaded with references and homage, the large majority being story-important. You can even have a rap battle with Jay and Silent Bob cosplayers; relatedly; Randal's name should look a little familiar.

The game can be easily found on Steam.