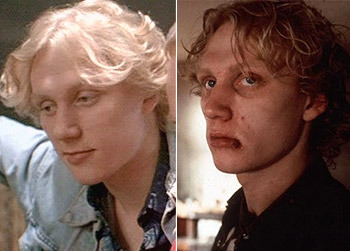 From fresh-faced young thing to HIV-ridden junkie in 93 minutes flat!
"I said my/Ever loosening grip/On the commonest courtesy slipped
From my hands/Where I really need her/When I need change/For the parking meters
I said my my my/My slow descent/Into alcoholism it went"
— The New Pornographers, "The Slow Descent Into Alcoholism"
Advertisement:

The key aspect of this trope is that at the beginning of the Story Arc, the character is not an addict, and is either only a casual user of the substance/activity in question, or abstains entirely. It's not an example if the character is an addict from the outset of the work.

Addiction (needing more and more to get the same result) and dependence (needing to take the same amount each time) are often confused or conflated in these portrayals. These works usually don't bother to distinguish between physical (the body expects it) and psychological (you think you need it, more like a Magic Feather) dependence, either.

Compare and contrast Off the Wagon, in which a recovered addict relapses (it's possible for a work to be an example of both tropes, if the work opens after the character has made their initial attempt at recovery). In TV series and cartoons aimed at children, this may often be the subject of a Very Special Episode (possibly with a Frothy Mugs of Water-style substitute for a real drug). Often involves a Compressed Vice. Typically an example of Drugs Are Bad. May lead to the character's friends and family Staging an Intervention. Sometimes, particularly in works made during The '80s, it starts with The Aggressive Drug Dealer.

See also The Alcoholic, The Gambling Addict, Extreme Libido, Functional Addict, Addled Addict, and The Teetotaler for related character types. Compare Slowly Slipping Into Evil and This Is Your Brain on Evil when evil deeds are treated like an addiction.