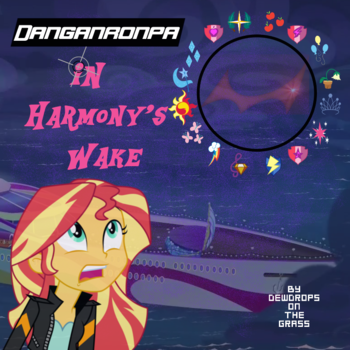 Sunset Shimmer, twenty-four years old, woke up on a cruise ship, without knowing how she got there, or why. She encountered fifteen other souls, all of them trapped aboard by a mysterious pony known only as Monoponi, who told them there for one purpose, and one purpose only:

To kill each other.

Now struggling to survive while desperately trying to recover what memories she's lost, Sunset is thrust into a deadly situation, where anyone, at any turn, could become the next killer. Who will survive? Who will die? What is Monoponi's true goal? Who is he, really?

Sunset can only hope to find out before she, too, becomes a victim of the killing game.

was eventually released. It is a collection of pieces covering various scenarios and moments from Danganronpa: In Harmony's Wake, ranging from alternate scenarios/endings, to various little moments from perspectives other than Sunset Shimmer's.