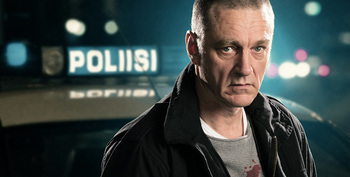 Sorjonen, also known as Bordertown on international markets, is a Finnish detective drama that airs on Yle TV1 and is available for streaming on Netflix.

The series focuses on Detective Inspector Kari Sorjonen (Ville Virtanen), a talented if peculiar detective that moves from Helsinki to Lappeenranta, a small town that borders with Russia, after his wife barely survives brain cancer, in order to live a more peaceful life — but things are not actually very peaceful in a town caught between two worlds.