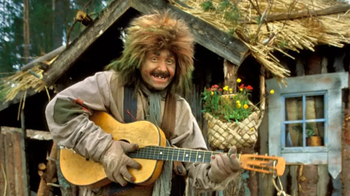 Rolli (Rölli in Finnish) is a well-known children's television character in Finland. He was originally created in 1985 by the Finnish actor and screenwriter Allu Tuppurainen as a character in radio dramas and children's songs. The songs led to the creation of the television series that was first aired in 1986 on the children's TV show Pikku Kakkonen (Finnish for "the little two"). The original episodes were produced until 2001 and older episodes have been seen in constant reruns on the program. Tuppurainen not only wrote and directed the show and composed music for it, but he also starred as the main character.

Rölli is a troll-like creature who lives alone in a small wooden cabin in the middle of "Rölli Forest". He prides himself on the fact that he never brushes his teeth or takes a bath. He portrays himself as a terrible scarer like the rest of his species, but he's in reality shy and goodhearted. He occasionally commits thoughtless and silly acts out of enthusiasm, but not out of real malice. He spends his days by telling stories of his amazing adventures, often criticizing and questioning public norm or the activities of people (especially humans). However, Rölli himself has been known to fall prey to human wonders and gadgets, and later regret it. The series didn't initially have a very well organised mythos, and Rölli would often claim to have met witches, ghosts, robots, giants and some such which would never actually appear on the show (some did appear in later audio plays).

Rölli has appeared in five feature-length films, portrayed by Allu Tuppurainen in all of them:

One of the themes coming to the fore in Rölli's songs, television series and films is the acceptance of one's own difference. Other themes are respecting nature, encouragement of curiosity, and facing one's own fears.

In 2006, Rölli was voted on the programme Satusuomalainen of Yle as the greatest Finnish fictional character.

The Rölli franchise provides examples of: