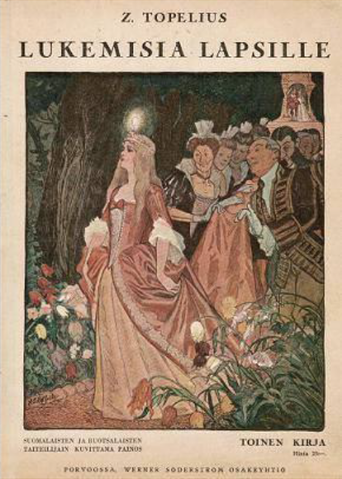 Adalmina is the only child of a king and queen and gets gifts from her two Fairy Godmothers. One gives her a pearl with the power to make her more beautiful, more intelligent, and richer by every day. The other promises that if she should ever lose the pearl, and with it all the beauty, wit, and riches, she will gain a pure, loving heart in their place. Adalmina grows up to be spoiled rotten, and being so much smarter, prettier, and richer than anyone else, she becomes an unbelievably proud, vain, selfish, cold-hearted little tyrant, and is generally a completely unbearable pain to everyone but her doting parents.

One day Adalmina grows bored enough to decide she wants to see the world beyond the castle walls, something she is not allowed to do in order to protect her pearl, now permanently set on a crown that magically grows to always fit her perfectly. Adalmina successfully escapes and gets lost in a forest, where she finds a beautiful, clear pond, which reflects her face just perfectly. And there goes her crown. Immediately Adalmina turns into a plain peasant girl, her rich gown into rags, and she forgets everything about herself, wandering dumb deeper into the forest.

An old woman finds her, and out of pity, lets her live with her and herd her goats. Adalmina, now possessing a kind and loving heart, is grateful for what little the old lady can offer her, and is happy to live with her in a humble cottage.

Adalmina's parents of course are terrified to hear about the disappearance, and send out a message that should any prince or nobleman succeed in finding the princess, they will be rewarded with her hand and half of her father's kingdom. One prince, who has previously heard about Adalmina's divine beauty and matchless intelligence, has fallen in love with her from afar and is determined to find her. He travels far and wide, and everyone he meets thinks the rotten princess may as well stay lost. Finally, after years, he finds the crown and realizes finally that he has no interest in the princess anymore. Tired and lost in the woods, he happens at the old goat woman's cottage and stays for a few days before setting off to return the crown to Adalmina's parents.

The king and the queen are overjoyed to learn about the crown, and send out a message for every appropriately old girl in the kingdom to come to test for the crown. As expected, the crown is passed from head to head but fits no one. The prince has now had enough of all of this and says he will only stay until the sun sets, and if the princess is not found by then, return home. Yes, just as the sun is disappearing behind the horizon, the goat herder girl from the cottage shows up on the road to the town. The prince is happy to see the kind and humble girl from the cottage and swears that promised and kingdom or not, should cruel Adalmina ever return, he won't accept her hand but instead will marry the goat herder girl.

In the end, the crown fits the girl, and she transforms back into the Adalmina everyone knew, with her memories and all her beauty, intelligence, and riches restored. Her heart however has permanently thawed, and she falls down on her knees teary-eyed to beg forgiveness for every cruel deed she has ever committed. The people rejoice, and the prince is happy to marry the princess.

This folk tale provides examples of: