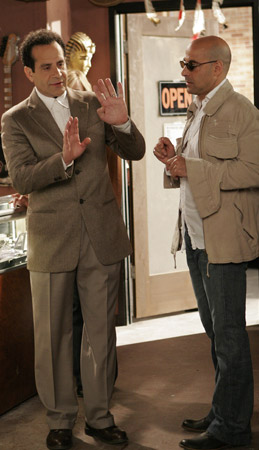 Monk frames the scene.
War Doctor: Are you capable of speaking without flapping your hands about?
Eleventh Doctor: [exaggerated shrug] Yes. [claps hands together] ...no.
— Doctor Who, "The Day of the Doctor"
Advertisement:

Facial expressions and physical gestures as idioms. Some of these were invented for television, some came from the wild, but TV certainly gives them extra attention — it's a big way that TV differs from the stage.

Things like Spock's "Fascinating" eyebrow-raise, the wide eyes of surprise, the "these people are crazy" eye-roll, the scoff of derision, the furrowed brow of anger, the other kind of furrowed brow of concentration, and the lip-curl of disgust.

Animation has its own pile of these, like bulging or heart-shaped eyes, or Anime's sweat drop of embarrassed exasperation.

These are distinct from Reaction Shots, which have a narrower and more specific meaning.

When it's a character in a video game performing the action over and over because the developers programmed a perfectly good action and want to get as much out of it as possible, it's Going Through the Motions.

In general, video games that go through the motions can have some positions that look unique enough to seem like a character tic, which may or may not be intentional, and if not, likely becomes Ascended Fanon in a sequel if enough people think of it as such. Fighting Games in general give each character a trademark pose (or even more than one) that they assume upon winning.

A subtrope of Body Language and a supertrope to Nervous Tics. This may be justified if the specific gesture is a Magical Gesture, or otherwise a way to guide/throw out their powers. Twitchy Eye is a specific type of character tic used to convey anxiety, rage, or impending psychosis, Maniac Tongue similarly indicates mental instability, and Badass Fingersnap is a yet another type of tic. For specific gestures done while deep in thought, see Thinking Tic. For the verbal version, see Verbal Tic.

Compare The Tell, for when the characters do more than just a gesture, as a sign for their characterization and condition.

Chef Shinobu Mifune tugs his red neckerchief whenever he's able to figure something out about his customers in Bistro Pas Mal.

Chef Shinobu Mifune tugs his red neckerchief whenever he's able to figure something out about his customers in Bistro Pas Mal.