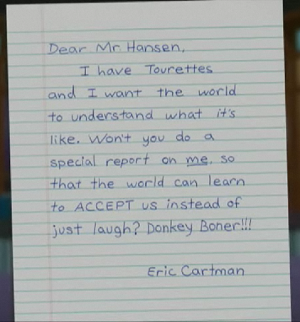 In real life, Tourette's Syndrome is characterized by involuntary "tics" that the person feels compelled to perform fairly regularly; depending on the severity, this can range from an easily-suppressed thought to actions so uncontrollable that it makes Adrian Monk seem perfectly normal. To be categorized by a psychiatrist as Tourette's (instead of a related disorder), the sufferer must have multiple physical tics or at least one Verbal Tic. These tics can range from something small like uncontrollable breathing patterns or involuntarily pulling a face to hand movements and gestures to specific words. Around 10% of people with Tourette's also display something called "coprolalia" (derived from Greek, literally meaning shit-talking), which is the involuntary uttering of socially unacceptable things.

In TV land, though, Tourette's Syndrome is coprolalia. In most people's minds, Tourette's is a condition where people fire Cluster F Bombs upon Cluster F Bombs and nothing more. It makes sense that this is how it would be treated — it gives the writers the chance for a Very Special Episode about accepting others even if they are different... and the chance to Cross The Line Twice with really, really dirty language.

The kind of things people "with Tourette's" say on TV and in movies varies significantly depending on the medium and culture. American TV tends to avoid f-bombs and really strong profanity, though cable can be a little stronger. "Ass" is more common, as are other naughty parts of the body. Obscene words for women are usually out so as to avoid being accused of sexism, but milder words are usually cool.

Ethnic and racial slurs are usually out to avoid being racist (except when a person accidentally blurts out the n-word in a room full of black people, and hilarity theoretically ensues). Slurs like "queer" have traditionally been fair game, but more recently this has been on the down slide to avoid homophobia. Foreign swears have always been very popular, as they enable a person to use much stronger language, as the audience (and the censors) won't be as likely to understand their severity.

Very mild swears like "damn" and "hell" are usually not used, unless to signify how lame the person with Tourette's is. Compound swears generally fall under the rules for the worst swear making up the compound. The exception to this being compounds that alter the nature of the swear. Of course, this varies.

And occasionally, a show might just even feature a person with Tourette's who doesn't swear. (An episode of 20/20 profiled a real-life sufferer who said things like "Help! My underwear's on fire!")

Note that coprolalia does not occur in writing (or typing). Most moderators of major chatrooms are in fact aware of this.

South Park made an episode using this trope to show how ridiculous it can be when used in media.

South Park made an episode using this trope to show how ridiculous it can be when used in media.