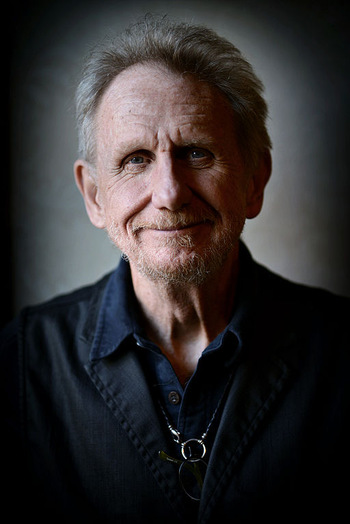 "If you do your job properly you usually learn a lot from any role you do."
Advertisement:

Born in New York City and raised in Paris, Auberjonois came from distinguished stock. His father was a Pulitzer Prize-winning foreign correspondent, while his paternal grandfather and namesake was a prominent Swiss post-impressionist painter. On his mother's side of the family, he was the great-great-great-grandnephew of Napoléon Bonaparte, whose sister Caroline married Joachim Murat, one of Napoleon's generals.

In films, Auberjonois portrayed Father Mulcahy in Robert Altman's M*A*S*H and provided the voice of Chef Louis in The Little Mermaid, in which he sang "Les Poissons". He also voiced Flanagan, the human film director of "Li'l Ark Angel", in Cats Don't Dance; the mysterious Mojave mogul Mister House in Fallout: New Vegas; and the evil vampire Janos Audron in the Legacy of Kain series.

But perhaps his most familiar role would be as Security Chief Odo in Star Trek: Deep Space Nine. Other TV roles included Clayton Endicott III on Benson and Paul Lewiston on Boston Legal. He also lent his voice to many animated series, including Challenge of the GoBots (as Dr. Braxis), Pound Puppies (2010) (as McLeish), Pepé Le Pew in The Looney Tunes Show, and Desaad for the final two seasons of Super Friends (the Super Powers era) and many years later in Justice League (replacing Robert Morse from Superman: The Animated Series), where he also voiced space pirate Kanjar Ro. In 2018 he reprised the role of Odo for Star Trek Online's Victory Is Life expansion.

After Auberjonois died of metastatic lung cancer in 2019, Star Trek Online's players honored him with an in-game candlelight vigil

Roles on this wiki:

Tropes associated with Auberjonois and his work: