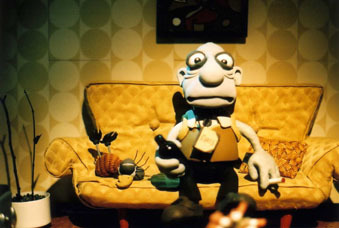 Harvie Krumpet is a darkly comedic stop-motion animated short film made in Australia in 2003. It was written and directed by Adam Elliot, who later made the stylistically similar Mary and Max.

Harvie is born Harvek Milos Krumpetzki in Poland in 1922. He's an odd little fellow afflicted with Tourette's syndrome. His illiterate mother attempts to school him, giving him a lifelong appreciation of "fakts". When Those Wacky Nazis roll into Poland, Harvie flees, emigrating to Australia and Anglicizing his name to "Harvie Krumpet." Life continues to buffet him with bad luck—he loses a testicle, he needs a plate in his head, he gets struck by lightning—but Harvie keeps soldiering on. He gets married, raises a daughter, and discovers the joy in living.

Narrated by Geoffrey Rush; and won the Academy Award for Best Animated Short Film in 2003, beating even Disney and Pixar!