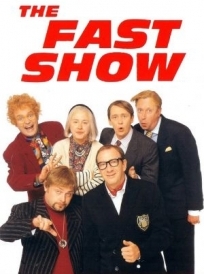 British sketch-based show in The '90s. One of the best British comedies of the decade.

Lots of regular characters, and lots of regular catchphrases. "Suit you, Sir", "Does my bum look big in this?", "I'll get me coat", "I'm a little bit wooh, a little bit waaay", "...which was nice", "I'm afraid I was very, very drunk" and so on. Singlehandedly added several Stock British Phrases to the language.

According to creator Paul Whitehouse, the show's format was inspired by when he was working on Harry Enfield and Chums and made a five-minute reel of highlight clips (mostly sketch punchlines) to send to the BBC to be used in previews - he then decided that "character comes on, someone shouts 'ARSE!', bang, next sketch!" was actually funnier than the usual sketch buildup, and created a show around that format (hence "fast").

Probably the best known celebrity fan of the show is Johnny Depp, who allegedly kept trying to insert its catchphrases into the Pirates of the Caribbean films.

A Nick Park-esque animator demonstrates how laborious the stopmotion process is.

A Nick Park-esque animator demonstrates how laborious the stopmotion process is.