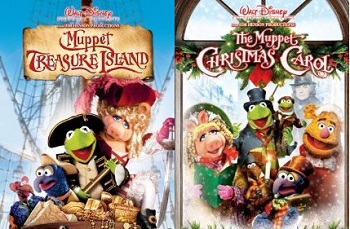 Sometimes it is easy being green.
"If you're familiar with things like Popeye and some of the old comic characters, you would oftentimes see this cast of characters that takes on different roles depending on the comic or cartoon. They might be businessman in one [cartoon] or a pirate in another. Depending on the story that was being told, they would change roles. So, to a certain degree, I look at our characters in a similar way and feel that they can take on different roles in different games. It's more like they're one big family, or maybe a troupe of actors."
— Shigeru Miyamoto on the Super Mario Bros. spinoffs

You have a set of characters. They work well as an ensemble; so well, in fact, that they can be slotted into just about any scenario you care to imagine, within the constraints of genre. So you can see them, identical but for different trappings (this character was wielding a sword, now it's a blaster pistol...), in places as diverse as Feudal Japan, the Modern Era, Space Opera, etc., etc., etc.

What you have is a Universal-Adaptor Cast: an ensemble is cast into an odd situation and yet fits in perfectly because their roles and characters are so well-defined. They have the same personalities and the same relationships, but play out the conventions of that genre regardless of how bizarre it would be for them normally.

This is one of the essential justifications for Transplanted Character Fic, including the High School AU. The Magnificent Seven Samurai is a specific subtrope of this. Many Moe and Merchandise-Driven works are created with this trope in mind. Separate Scene Storytelling is often done this way. Commedia dell'Arte, the former Trope Namer, is a whole subgenre of theatre based upon the concept. Such a franchise is likely to have Negative Continuity, as, with a few exceptions, it's rather difficult to explain why the characters keep changing settings, roles, and time periods from story to story.

Do not confuse with "The Star System", a name coined by Osamu Tezuka for Reused Character Design which treats reused designs as if they were actors.