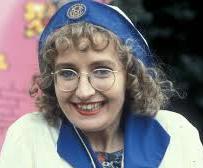 "Don't tell Miss Cathcart!"
"Someone once said to me 'Never dismiss how you became famous, because if you do you're essentially laughing at other people's memories'. And I've always lived by that rule because so many people have good memories of Hi-de-Hi!, I know I do, so I never take it for granted."
Advertisement:

Her interest in acting began when she played an angel in a school nativity play at 6 years old. Upon leaving school when she was 16, she began singing in men's clubs and at charity shows.

In The '70s she began appearing in various musicals and farces, before landing her first sitcom role in 1979, as Flo in Two Up, Two Down. Only one series aired, but that same year Pollard received the script for the Hi-de-Hi! pilot. Peggy only had one major scene in the pilot, but Pollard's performance stuck with audiences and with each following series Peggy was focused on more often, and was Promoted to Opening Credits starting in the sixth series in 1984.

After the end of Hi-de-Hi!, David Croft gave her starring roles in two more of his sitcoms - clumsy maid Ivy Teasdale in You Rang, M'Lord? and flustered booking clerk Ethel Schumann in Oh, Doctor Beeching!.

She is still a recognizable face in British pantomime to this day.