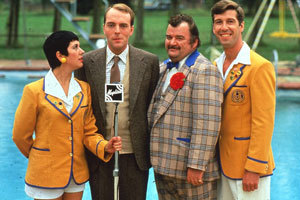 The Maplins entertainment staff. L-R: Gladys, Jeffrey, Ted, Spike.
If you’ve got the blues, then I’ve got some news,
Join in the fun in your blue suede shoes,
With the holiday rock, the holiday rock,
The ho-de-ho-de-hi-de-hi holiday rock!
Advertisement:

Hi-De-Hi! is a Brit Com set in Maplins, a fictional 1950s holiday camp starring Paul Shane, Simon Cadell, Ruth Madoc, Jeffrey Holland, Su Pollard, and David Griffin. It was created by Jimmy Perry and David Croft, who also wrote Dad's Army and You Rang, M'Lord?. The title refers to the catchphrase exchanged between the campers and staff. The series focused mainly on the lives of the camp's staff, most of whom were either past their glory days, or trying to break into the entertainment industry.

In the first episode, the position of Entertainments Manager at the Crimpton-on-Sea camp is taken by shy, upper-class Cambridge archaeology professor Jeffrey Fairbrother (Cadell), who feels stifled by his job and relationship problems. His estranged wife is seeking a divorce, but he is reluctant to end the marriage. He is hoping to re-invigorate himself with a change of scene. However, while he is a capable manager, he is a hopeless entertainer, and most of the actual entertainment is co-ordinated by camp host Ted Bovis (Shane), a comedian whose professional career never quite took off but whose cheerful and charming personality makes him popular with the campers, and makes up for his scheming and dishonesty in cheating them out of money with rigged raffles and bingo games. The sports, meanwhile, are organised by Chief Yellowcoat Gladys Pugh (Madoc), who is not shy about bossing around the other staff members - collectively known as Yellowcoats because of their signature yellow blazersnote  This makes them fictional counterparts to Butlins Redcoats, Pontins Bluecoats, and Warners Greencoats. - and is instantly and hopelessly attracted to Jeffrey from the moment she meets him (Jeffrey quickly catches on to her affections but feels unable to reciprocate, being unwilling to give his wife grounds for divorce).

Among the entertainment staff are camp comic Spike Dixon (Holland), a young, enthusiastic up-and-comer whom Ted has taken under his wing and who believes his job at Maplins is the first rung on the ladder to stardom; former professional jockey Fred Quilley (Felix Bowness), whose jockey licence was revoked after his implication in a cheating scandal and who is biding his time as a riding instructor until his licence can be restored; former champion ballroom dancers turned dance instructors Yvonne and Barry Stuart-Hargreaves (Diane Holland and Barry Howard), two outrageous snobs (despite being of middle-class heritage at best) who feel most of their duties as Yellowcoats are beneath them; and former music hall performer turned Punch and Judy man "Uncle Willie" Partridge (Leslie Dwyer), a hopeless alcoholic who hates children. Desperate to join their ranks is chalet maid Peggy Ollerenshaw (Pollard), who willingly participates in all manner of Zany Schemes and absurd performances if it means she has a chance of becoming a Yellowcoat.

The younger Yellowcoats include Gary Bolton (Terence Creasy in Series 1, Chris Andrews thereafter); identical twins Stanley and Bruce Matthews (David and Tony Webb); attractive blonde Sylvia Garnsey (Nikki Kelly), who has a long-running rivalry with Gladys; and a revolving door of other female staffers including Betty Whistler (Rikki Howard), Mary (Penny Irving), Val (Gail Harrison), Tracy Bentwood (Susan Beagley), Dawn Freshwater (Laura Jackson), Babs Weaver (Julie-Christian Young), and April Wingate (Linda Regan), the last of whom was romantically involved with Spike in the later series. Many of them are fresh out of drama school and hoping, like Spike, that their jobs at Maplins will put them in view of talent scouts and agents to launch their entertainment careers.

Simon Cadell left after Series 5, so Jeffrey Fairbrother was written out as having taken a faculty position at the University of Wisconsin in the USA between summer seasons and replaced by Squadron-Leader the Honourable Clive Dempster DFC (Griffin), who, in contrast to the introverted but hard-working Jeffrey, is brash, flirtatious, and perpetually on the make. Gladys almost immediately transfers her affections to Clive after Jeffrey's departure; their relationship is more turbulent but ultimately more successful. Leslie Dwyer during the filming of Series 6 due to declining health (he passed right before the end of Series 8), so the camp children's entertainer position was passed to "Uncle Sammy" Morris (Kenneth Connor), another alcoholic music hall star fallen on hard times. Finally, Barry Howard left after Series 7, so Barry was said to have left Yvonne and was replaced by her former dance partner Julian Dalrymple-Sykes (Ben Aris), a more down-to-earth character who also worked as a pig farmer.

Hi-De-Hi! ran for nine series from 1980-88; it could have run for longer, but some of the location shooting was done at a former Warners holiday camp in Dovercourt, Essex,note  Mill Rythe Holiday Village in Hampshire was also used for location shooting and remains open to this day. and in 1987, the land was sold to housing developers and the camp was demolished, so the final series wrapped up several of the more long-running plot threads.

"First rule of comedy - you must have tropes":