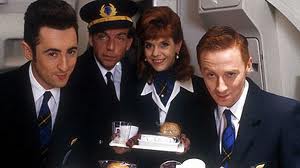 From left to right: Sebastian Flight, Captain Duff, Shona Spurtle and Steve McCracken.
If we're feeling kind of tedious,
if life is seriously mediocre,
here's how to get that adrenaline flowing:
just step up on a boeing going high.

This sitcom followed the cabin crew of the fictional "Air Scotia" airline, based at Prestwick Airport in its pre-Ryanair days. There's the camp, ego-centric Sebastian Flight, perennially single Steve McCracken, their boss Shona "Hitler in Tights" Spurtle and a Captain who is so out of it, he makes Dougal seem normal. Add surrealism and song and dance numbers for anarchy.