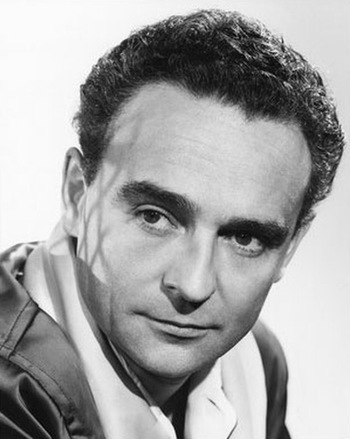 Kenneth Connor MBE (6 June 1918 – 28 November 1993) was an English actor, mostly known for his comedic roles as a regular cast member in the Carry On film series, as well as for his appearances as recurring characters in 'Allo 'Allo! and Hi-de-Hi!.

Born in the Islington district of London, Connor began his career as a stage actor after graduating drama school, and toured around the world with a concert party while he served in the British Army during World War II. When the war finished, he decided to become a serious actor instead of a performer, and joined an Old Vic company and acted alongside Alec Guinness in The Government Inspector, soon deciding to act more in comedy. He appeared on many radio shows, doing voice acting for many comedic characters, as well as appear in many bit roles on television throughout the rest of the 1940s and the early 1950s.

His first Carry On film was Sergeant, and continued to appear in seventeen of the movies. He took a hiatus between Cleo and Up the Jungle to appear in many stage shows in London's West End, featuring A Funny Thing Happened on the Way to the Forum and numerous others, as well as radio and television. He, alongside Kenneth Williams and Eric Barker, were the only Carry On regulars that appeared in the first film and the (supposed, par Columbus) last film of the franchise.

When the Carry Ons finished, Connor began to appear as recurring characters in children's TV series Rentaghost and 'Allo 'Allo! in the 1980s. He made a memorable appearance in a sketch on Blackadder and portrayed uncle Sammy Morris in Hi-de-Hi!.

Two years before his death of cancer, he received an MBE for his years and hard-work in drama and performing arts, and continued to work until his dying weeks, leaving a legacy of laughs and diverse comic genius.