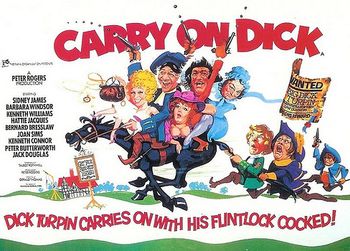 "WHERE CAN WE FIND DICK??!"
Scottish Highwayman: STAND AND DELIVER!
Dick: That's just what I was about to do.
Harriett: And about time too!
— Dick Turpin and Harriett bump into company
Advertisement:

Carry On Dick was released in 1974, and was the 26th film in the Carry On series. It was based on the Georgian historical highwayman Dick Turpin, who was known for robbing aristocrats around England, and stars Sid James, Barbara Windsor, Kenneth Williams, Hattie Jacques, Bernard Bresslaw, Joan Sims, Kenneth Connor, Peter Butterworth, and Jack Douglas. This was the last Carry On film for James, Jacques, and Windsor.note Though all three appeared in episodes of Carry on Laughing! and Windsor co-hosted the compilation film That's Carry On!

Dick is an Affectionate Parody of a history event, much like Carry On Henry and Carry On Cleo, making the movie focus around the Loveable Rogue Dick Turpin (James) and his life as a reverend in the day and a highwayman at night. Possibly because of his legacy, the town is full of thieves that walk the streets and rob from rich citizens in carriages, but the secret police, the Bow Street Runners, led by Sir Roger Daley (Bresslaw) and Captain Desmond Fancey (Williams), have captured every single one. The problem they face is that quick-witted Dick is always one step ahead of them, with the help of his friends Tom Scholl (Butterworth) and Harriett (Windsor), who also help him at the local church with the oblivious Martha Hoggett (Jacques).

Despite the Runners intervening on many of Dick's ambushes, Dick manages to hold up Madame Desiree (Sims) and her Birds of Paradise, and repeatedly rob Sir Roger and his Lady wife (Margaret Nolan). Captain Fancey and Sergeant Jock Strapp (Douglas) decide to go alone, in fear of being fired by Sir Roger, and manage to find out the history of Dick Turpin, which they try and use to their advantage, with disastrous results. Many times, they are arrested by the blithering Constable (Connor), who cannot tell the difference between criminals and members of his police squad.

Expect a Hurricane of Puns, bawdy humour, and Sid James' dirty laugh. It is a Carry On film, after all.