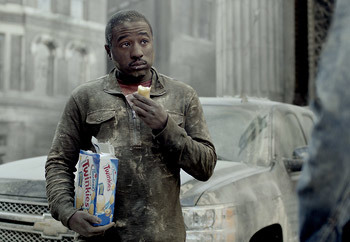 So indestructible, even the box looks brand new.
"Even the long loaf of dwarf bread that he carried into battle, and which could shatter a troll skull, was by his side. Dwarf scholars had, with delicacy and care and the blunting of fifteen saw blades, removed a tiny slice of it. Miraculously, it had turned out still to be as inedible now as the day it was baked."
— Terry Pratchett, Thud!
Advertisement:

Some foods last a really long time. They'll survive weeks in the wilderness, months under your bed, or even The End of the World as We Know It. And after all that, they're still edible... well, as much as they ever were, anyway. Which is usually "not very".

Twinkiesnote Which, contrary to popular belief, last about a month before they go bad. That isn't to say they become inedible, as the sugar content acts as a preservative (along with all the other ingredients intended as preservatives) which prevents mold and other nasties growing on it, but after a few months, you're looking less at a Twinkie and more at a stale, increasingly hardening sponge cake with slowly-evaporating cream filling. Still significantly better than many other pastries and baked goods, mind you, but hardly the centuries-long shelf life that urban legends claim. and other preservative-laden snack foods are the ones that most commonly get this treatment, but it's sometimes applied to canned foods as well.

This trope is extremely common in video games, especially in many RPGs where food can be collected.

Also commonly associated with fruitcake. Expect lots of jokes about using the offending foodstuff as a doorstop, paperweight, etc., or it being passed along between different relatives and friends (or from generation to generation) every Christmas for the past century.note Like Twinkies, there is some truth to this. If you store a fruitcake by periodically soaking it in liquor, then you can get one to last several years while still being just as edible as it was when you first baked it, thanks to the alcohol killing any bacteria.

If it's a military ration, it's likely to also be Nondescript, Nasty, Nutritious. Compare Inexplicably Preserved Dungeon Meat, It Came from the Fridge, and Way Past the Expiration Date. Usually even rats won't eat food like this. Indestructible Edibles are the perfect edibles to use for weapons and ammo. If it's really hard bread, it might be used to deliver a Baguette Beatdown.