Even the Rats Won't Touch It 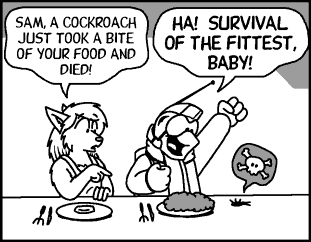 Wes: [referring to their prison rations] Imperial MRRs. Meals Ready to Regurgitate.
Ibitsam: At least the local rodents seem uninterested in them.
Wes: Right. So we have no bait for fresh meat.
— X-Wing Rogue Squadron, "In the Empire's Service"
Advertisement:

This trope usually occurs in a prison or school/camp cafeteria. The food that a character is served is so terrible that even the rampant vermin (or some other animal widely considered undesirable) refuse to eat it. Maybe because it's an Indestructible Edible, maybe because it's just that bad-tasting. This is usually used to demonstrate how terrible the food is.

Often the product of a Lethal Chef, and usually in the form of Mystery Meat. Compare Even Beggars Won't Choose It for the non-food variant, as well as Even Evil Has Standards and Even the Dog Is Ashamed. See also Too Spicy for Yog-Sothoth, when an Eldritch Abomination turns down a meal of the hero. For other dystopia-like looks at food, see Future Food Is Artificial and Poverty Food. Subtrope of Everyone Has Standards. Sometimes inverted by having only a rat or whatever like it; see Only One Who Likes Spam for that.

Even the mice find the girls' sandwiches to be gross.

Even the mice find the girls' sandwiches to be gross.