Literature / The Chronicles of Ancient Darkness 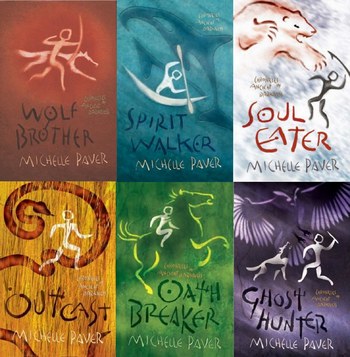 A series of books by Britain-dwelling writer Michelle Paver. It is set in northern Europe — most likely Scandinavia — six thousand years ago and widely concerns the hunter-gatherer clans that live in the Forest, but specifically concerns Torak note Not related to the Big Bad in The Belgariad of Wolf Clan, as well as his wolf "pack-brother" called Wolf and his friend Renn of Raven Clan. The books follow the three companions as they stop a group of evil Mages (shamans) gone rogue, called Soul Eaters. The series takes place over approximately four years.

There are six books, with the final one released in August 2009:

Even if Stone Age-set adventures aren't your cup of tea, these are worth reading for the worldbuilding. Ms Paver has done a lot of research into the world she writes about. She has also written a similar series set in the Bronze Age Greece, called Gods and Warriors.