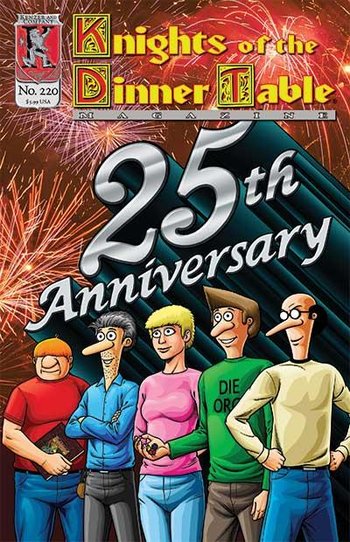 Knights of the Dinner Table (often abbreviated KoDT) is a long-running comic series by Jolly Blackburn about a group of Tabletop RPGers. It is also the name of the magazine in which the comic currently runs, and has run since departing the pages of Shadis and later Dragon magazines. The magazine also features other gaming and fantasy comics, such as SnarfQuest, reviews, role-playing scenarios, and various other gaming-related content. Blackburn also did a series of shorts for the first thirteen issues of Palladium Books' magazine The Rifter.

KODT has a spin-off strip called Java Joint that runs in the fantasy magazine Black Gate. Java Joint centers on the (mis)adventures of a book club consisting of Sara, Patty and Tank.

open/close all folders
Advertisement:
Main Cast
Supporting Cast
There are several additional gaming groups in the KoDT universe, including the Black Hands, a group of oddballs and outcasts who game together because no one else will have them. The Black Hands roster includes:

In addition, there are Loads and Loads of recurring minor characters.

A live-action adaptation is currently in the works. A Kickstarter fundraiser was successfully completed on February 5th, 2014, and three 20-minute episodes have been produced. As of end of September, 2015, they have been released to backers only.

Knights of the Dinner Table provides examples of the following tropes: