Shrunk in the Wash 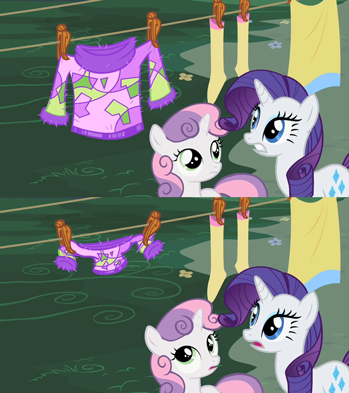 Even if they don't normally wear clothes, it's still Serious Business for Rarity.
Advertisement:

Clothing in real life, especially untreated wool, has a nasty habit of shrinking if you don't follow those cryptic symbols on the tag; and nobody knows what they mean. At worst this means it'll become a size smaller, probably just annoyingly too snug, forcing you to abandon it.

Not in media, however, where this trope is more extreme. Even the slightest dash of water could reduce an expensive three-piece suit to the size of atoms. Even things that shouldn't logically shrink aren't safe from incorrect cleaning!

In magical settings where Shapeshifting Excludes Clothing, characters who went through an Oblivious Transformation into a larger form may assume that their now-tighter clothes shrank this way.

Most likely to occur in animation, where they can show the clothes shrink in real time, but not limited to that medium.

Bubbie rescues Flapjack and K'nuckles from Harvey the whale by throwing him into his own laundry machine.

Bubbie rescues Flapjack and K'nuckles from Harvey the whale by throwing him into his own laundry machine.