Western Animation / The Barber of Seville 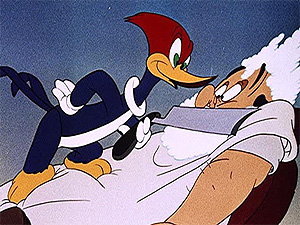 The Barber of Seville is a 1944 Walter Lantz cartoon directed by Shamus Culhane and starring Woody Woodpecker.

It follows Woody as he stumbles across a vacant barbershop and takes it over for the time, much to the mistreatment of his customers, including a Native American and an Italian construction worker, whom he shaves to the tune of "Largo Al Factotum". Hilarity Ensues.

This was not only the first of several Woody shorts that Culhane would direct but also the first Woody Woodpecker cartoon to use Woody's beloved streamlined design. The art direction was also substantially altered from lush storybook-like watercolor backgrounds to downright minimalist, flat colored layouts.

Not to be confused with the Bugs Bunny short Rabbit of Seville.