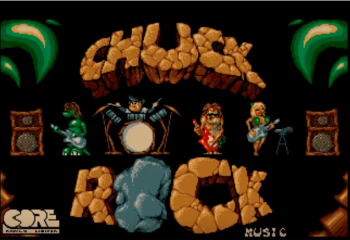 Most people just sit here on the title screen just to listen to the music.
"Unga Bunga!"
Advertisement:

A 1991 Platform Game. Developed by Core Design and published by Virgin Games.

Chuck is enjoying a pretty swell life, until his long time rival Gary Gritter kidnaps his wife, the beautiful Ophelia.

Naturally, Chuck is having none of this, and sets off on a quest through five stages to rescue Ophelia and put Gary in his place. Chuck can fend off foes with his belly, jump kicking them, and of course, picking up and chucking rocks at them.

The game was released for various systems. You'd be hard pressed to find a game console or computer during the 16-bit era that didn't have this game. It even found it's way onto some 8-bit computers and consoles.

The game got a sequel, Chuck Rock II: Son of Chuck released a year later and stars Chuck's son, Chuck Jr., who has to rescue his father from the evil Brick Jagger. A third game was promised but never materialised after the studio shifted focus to the Tomb Raider franchise.