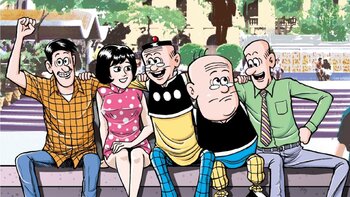 In the context of the strips, Old Master Q, Big Potato and Mr. Chin are close friends; Mr. Chiu often play an antagonistic role toward the trio; finally, Miss Chan is often portrayed as a love interest to Old Master Q.

Old Master Q provides examples of (Note: Most tropes are Played for Laughs):