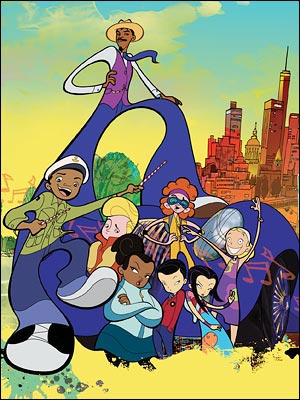 Class of 3000 is an Emmy Award-winning American animated comedy series that aired on Cartoon Network from 2006 to 2008. The series was created and executive produced by musician André "3000" Benjamin of the hip-hop group OutKast, who also voiced one of the main characters. The show was also co-created and developed by Thomas W. Lynch (The Secret World of Alex Mack) and Patric M. Verrone (Futurama).

The show follows Sunny Bridges (voiced by André 3000 himself), a world famous jazz and blues superstar. However, he has become disillusioned with celebrity life, ultimately resulting in him quitting during a concert in Japan. He plans to retire, moving back to his hometown of Atlanta, where the local Westley School of Performing Arts is at risk of shutting down its music program. Li'l D, self-proclaimed number one fan of Sunny's, discovers that he's back in town and, through some persistence, manages to re-ignite Sunny's love for music. Meeting the rest of Li'l D's friends which make up the music class (Madison, Tamika, Eddie, Philly Phil, Kim, and Kam), Sunny agrees to become their music teacher on the condition they keep the job fun for him.

The series premiered on November 3, 2006 as a one-hour special preceded by musical performances starring Chris Brown and Andre 3000. While the series was well-received, being one of the most popular series on the network during its run, budgetary issuesnote the myriad of music videos, with their wide range of art styles, weren't cheap, and the music sales that the network hoped would help production costs were middling at best and the Writers Guild of America strike of 2007-2008note in addition to the writing staff, Verrone himself happened to be head of the WGA at the time, resulted in the show's second season being its last. The final episode aired during a music-themed marathon in May 2008. The show's head writer was Meghan McCarthy, who went on to become story editor and showrunner for My Little Pony: Friendship Is Magic.

There's an Adobe Flash game that used to be on Cartoon Network's site called Funk Box. You can use music samples from each of the students to compose your own song. It can be played here.