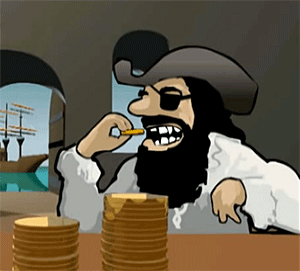 Those aren't crackers,
and Polly can't have one.
Advertisement:

When a character is given suspicious payment, they will often bite into it to check if it's genuine.

This may seem odd, but was (and still is) actually a common way to check the quality of gold: but not for the reasons people often assume. Gold is a soft metal, and thus conventional wisdom says that the deeper the imprint your teeth make (without revealing a different metal beneath the gold), the purer it is. However, this test would not be foolproof: Gold coins can have a core of lead (for the weight) which is soft enough to leave bite marks in. In fact, historically, gold was typically alloyed with other, harder metals to make it harder, while still maintaining the standard gold weight. Thus, the bite test was actually a means of detecting a lead forgery (teeth marks) versus a real minted gold alloy coin (no marks). Also, gold is an excellent heat sink; most metals quickly heat up when they're held, but gold remains cold in one's hand for some time - and the lips, tongue and teeth are even better than fingertips at detecting changes in temperature. Alloyed or cored gold heats up faster, and biting it is an easy way to test this - though in more polite settings, merchants kept a bottle of acid by the cash register; gold is a noble metal which is resistant to change by corrosion, oxidation or acid, so a merchant could determine the purity of gold by putting a drop of acid on it AKA the "Acid Test."

This tradition has mostly vanished in real life, due to most people not actually dealing with gold, but it is still seen occasionally in fiction. It's also quite common to see characters using this method to check other things to see if they're genuine. This method does work with pearls, wherein the goal is to feel the rough mother of pearl against the enamel of your teeth, as opposed to the smoother feel of fake pearls. If this is done with silver coins, though, it's a clear sign that somebody goofed; silver is quite hard, so the only sure way to check if there's some other metal beneath the surface is to drill a hole in it; actual silver tests were through checking the sound it makes, as mentioned below. There is no evidence that counterfeit coins were ever made out of wood, which could be distinguished by biting them; the old adage "Don't take any wooden nickels" referred to the practice of promoting a new store by handing out wooden tokens good for "five cents in trade". If the store goes out of business, the token is worthless.

As an interesting side-note, gold is very non-reactive and therefore biologically inert, meaning it's actually safe to eat and will pass through the digestive system without being absorbed. Some particularly fancy foods (often desserts) are adorned with gold leaf decorations which are meant to be eaten, and certain brands of alcohol contain tiny flakes of gold. In actual fact, this is the ultimate form of garnish. Because gold is non-reactive with anything in the human body, it does not actually have a flavor (another reason people might bite a coin to test it; if the coin contains a cheaper and more reactive base metal instead of/in addition to gold, it will have a "metallic" flavor).

Related is Hear Me the Money, when they check the currency by listening to it. Not to be confused with Metal Muncher or Extreme Omnivore, where biting the gold is followed by chewing and swallowing it. Not related to Edible Treasure, besides the treasure part.