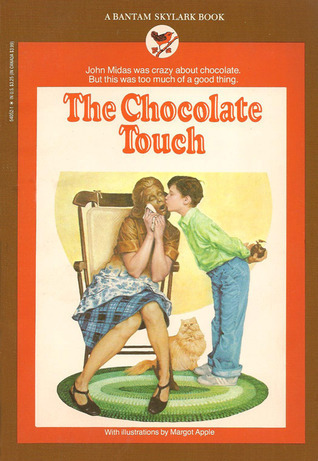 The Chocolate Touch is a 1952 children's book by Patrick Skene Catling based on the King Midas myth.

John Midas is a young boy with an obsession for chocolate. It's all he ever seems to want to eat, much to his parents' chagrin. When his doctor orders him to stop eating only chocolate, for the sake of his health, his parents agree, and John suddenly finds himself cut off, and his spending money managed by them.

Displeased with this, John goes for a walk, and finds a coin with a picture of a fat boy and the initials "JM" on it. He holds on to it and soon finds himself at a candy store he had never seen before. He goes inside, and uses the coin to pay for a box of chocolates that the owner insists is the finest ever. That night, John decides to have some of the chocolate, only to find one single piece, which doesn't taste all that different from other chocolate.

The next morning, however, John discovers that now everything he touches with his mouth turns into chocolate, which, of course, John is over the moon for... at first. Over time, it soon becomes clear to John that eating only chocolate isn't as great as he thought. Now, John has to find a way to undo the curse if he ever wants to eat anything else besides chocolate ever again.

The Chocolate Touch contains examples of: