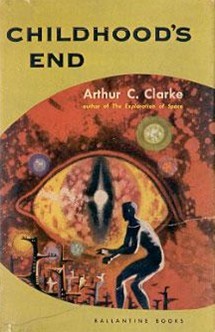 Childhood's End is a Science Fiction novel by Arthur C. Clarke, originally published in 1953 (but based off of a 1950 short story of his). The plot concerns the Benevolent Alien Invasion of an alien race called the Overlords. After stopping the Cold War and establishing a world government, they start to maintain peace on Earth, but refuse to show any images of themselves for fifty years. Humanity enters a golden age, before spoilery events happen. Yeah, you can't read much more than that without the entire plot being given away.

As suggested by the title, the main theme of the book is the end of humanity's "childhood" into a new era.

Shout Outs to it in fiction are not uncommon, ranging from some in Stargate SG-1 and Xenogears to the cover of Led Zeppelin's Houses of the Holy, the Pink Floyd song "Childhood's End" on Obscured by Clouds and the Genesis song "Watcher Of The Skies".