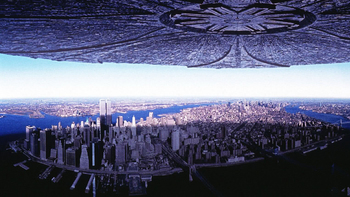 This does not look good...
"Independence Day. That alien invasion movie. The first part, where the aliens come and they look up between the buildings and the sky is gone and, like, all they see is metal. Just as far as you can see, that steel ship looming up there. I remember thinking that's what the end of the world will look like. It won't be wars and tanks or a meteor. It'll be something we never could have thought of..."
— Jennifer Lopez (not that one), John Dies at the End
Advertisement:

Some aliens want to make a grand entrance. This trope marks the tendency for fleets of mile-long alien spaceships to ominously hover, several hundred feet over the world's cities without doing very much. It usually means the start of an Alien Invasion but it can be subverted. Expect shots of shadows washing over cities like a tide, awe-stricken people looking upwards and Jitter Cam footage of the ships over every major city. Five Rounds Rapid against them will be useless while their Wave-Motion Gun will be devastating when they decide to use it. Absolutely no Midair Bobbing ever. Quite inexplicable as not only would it expend vast amounts of power and present a big target but by Newton's Third Law, crush everything underneath it. Perhaps it's because Power Floats or because ships float in the sea and Space Is an Ocean, but it also adds to the menace: how can something that big hang in the sky without making a furious amount of engine noise and disruption? Clearly, they must be fearsomely advanced, and the Puny Humans defenses will be nothing to them.

It nearly always occurs 20 Minutes in the Future by Higher-Tech Species and is never inverted. Probably because humans are too polite.