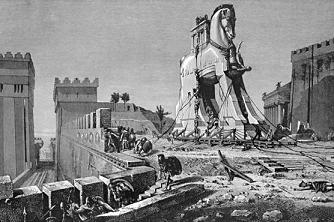 Ever since Odysseus ended ten years of futile war with a spot of carpentry, this has been one of the favourite tactics of clever characters faced with impregnable defenses.

In the simplest version, the Greeks simply hide inside a object which they know the Trojans will be unable to resist picking up and taking inside their defenses. If the Trojans aren't complete idiots, subterfuge will be used to get them to accept the object — anything from disguising it as a Trojan vehicle up to a full-blown Gambit Roulette. Common variations include hiding a well-trained animal inside the Trojan Horse, or a computer program. In Speculative Fiction the Horse itself might be a robot or shape shifter.

Whatever the details, the net result is the same. The Greeks get some of their agents inside the Trojans' walls, without the Trojans knowing they are there, which leaves the Greeks free to commit sabotage, assassinate the Trojan leader, or simply open the gate and let the rest of their friends in.

This contrasts with such tropes as Trojan Prisoner, I Surrender, Suckers, and the nailfile-in-the-cake trick, because in those cases the Trojans do know the Greeks are there, and are trying, however sloppily, to guard them. Thus, the Greeks don't usually have the degree of free rein the Trojan Horse gambit gives them.

It also contrasts with using similar tricks to smuggle inanimate objects inside the Trojan lines, typically poisons and explosives, since such objects can't make decisions. A Greek soldier, or even a well trained monkey, is adaptable. They can change plans in mid-stream, taking advantage of unexpected opportunities. Poison can't do that. Thus, a Trojan Horse allows many more narrative possibilities than do inanimate objects.