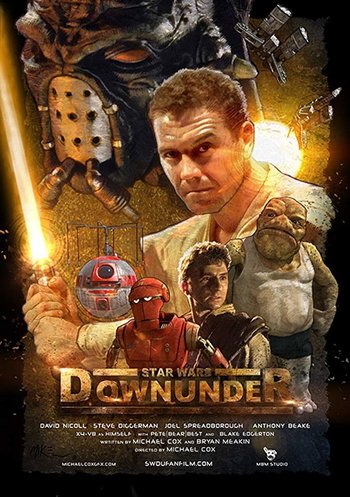 "No bull, mate! I'm a fair dinkum Jedi. And a bloody thirsty one, too!"
Advertisement:

Having run out of beer, Jedi Knight Merve Bushwacker decides to return to his home planet of Oradongia for a nice cold one. Unfortunately he discovers the evil Darth Drongo has destroyed every pub on the planet, hoarding all the amber fluid at his fortified brewery. Merve contacts his old mate Nugget, who hooks him up with some rebel blokes who are planning to stick it to this beer-hogging wowser!

A short Star Wars Fan Film created by Australian fans, its ten year production meant by the time Star Wars Downunder was finished the Official Star Wars Fan Film Awards no longer existed, so the film has instead been released online. You can watch it here,

though you might want to check out Australian Slang first for some useful notes.