Spice Up the Subtitles 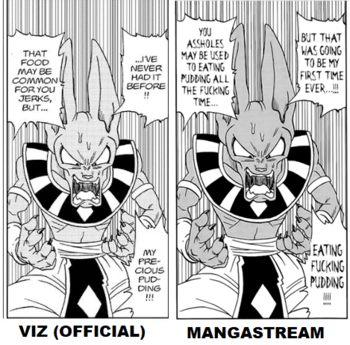 Beerus is the God of Destruction, not the God of Swearing.
Official: Screw you, Sasuke! I'm sick of your attitude! You are my friend, and nothing will change that, you idiot!
Fan: Fuck you, Sasuke! Ore translator's note Ore = I am fucking sick of your fucking attitude! You are my nakama, translator's note nakama is a word that means your closest friend like in one piece and there really is no English equivalent to how powerful that word is so we decided to keep it as nakama and nothing will fucking change that, you fucking bitch!
— ProZD, "official subs vs. fansubs"

Sometimes, a fansubber will insert dirty jokes and language, Double Entendre dialogue, UST, or any number of "inappropriate" things into the script in an attempt to "improve" the show, or to cover up the fact that they're not as fluent in Japanese as they want us to think. This may also be done due to the (now fading) idea that anime and manga are "cartoons" and therefore childish, and gratuitous swearing is a way to make them seem more "mature." And sometimes the "inappropriate" content is a natural result of attempting to translate things which are perfectly appropriate but don't have proper equivalents which are. Of course, when official translations are brought over, many fans who were used to the aforementioned sub script often are left wondering where all of the adult situations and dialogue (that never existed to begin with) went, and blame the series' Western distributors for having the gall to release such a horrible Macekre.

This also happens frequently to official releases that want to get out of the Animation Age Ghetto as fast as possible by adding as much family-unfriendly material as they can to the subtitles.

Difficulty translating things without them turning into profanity can also be a factor. A very common cause of this trope is Japanese expletive kuso. This word is an all-purpose expletive, and, despite being really not all that offensive, can be translated as literally any and every word to ever cross the English profanity spectrum, including but not limited to "shit", "oh shit", "dammit", "damn", "damn you", "God dammit", "crisse de tabarnak", "rats", "darn", "crap", "drat", "crud", "not good", "this is bad", "oh no", or even, in some cases, "help" (when you don't actually expect it). Literally speaking it means "excrement", so perhaps "crap" would be the closest English equivalent. Fansubbers generally understand that kuso is supposed to be a swear word but don't know how inoffensive it actually is, and - naturally - almost always skew heavily towards the more offensive translations regardless of whether or not it fits the tone of the series, makes sense in context, or makes the characters who use it sound like 12-year-olds. In addition, lightening up on swear words can sometimes give off a rather awkward and goofy Gosh Dang It to Heck! feeling, especially in works aimed at older audiences, so even when translators know that the word isn't offensive they may feel that the most fitting equivalent is one which is. Dubs tend to lean on the tamer side; generally speaking, the more experience a translator has, the better the profanity is handled. Another common culprit is respect levels - many languages, such as English, barely have them at all, so if a character is being particularly disrespectful, it can sometimes be difficult to convey this properly without the character using another kind of "rude language" entirely and swearing in the translation.