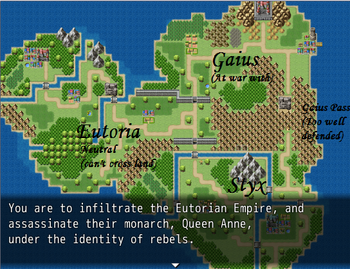 Looks like the beginning of a happy story...
"As a soldier, it is my duty to obey the Queen. Questioning the Queen may as well be treason. Her word is law. A disloyal commander is nothing more than a broken tool. I will not let Styx down, no matter the cost."
— Julius Logan
Advertisement:

Illusions of Loyalty is an Eastern RPG made in RPG Maker by Aegix_Drakan, and released in 2013. It follows the story of Julius Logan, a captain in the army of Styx, a nation at war with the neighouring Gaius, a war they're losing because of the heavily defended mountainous border that separates the two. The people are dissatisfied, and rebellions spring up, often with the direct support of Gaius. One of these rebellions has been suppressed by Logan in the prologue; he didn't falter even after it turned out to be led by his own brother.

To dispel any suspicions of disloyalty, he volunteered to lead his firing squad. Queen Sophie, understanding his devotion and knowing he would do anything to prove it, thus orders him and his squad on a highly-secret mission to cross the border to a third nation, Eutoria, and assassinate their Queen Anne,. Moreover, simple assassination is not enough: Gaius must be implicated, so that Eutoria will finally abandon its neutrality and join Styx in an open war on Gaius. Otherwise, Eutoria itself will enter war on Styx, only hastening its defeat. Sniper Sarah Hawke, Scout Eric Wilder and assassin Lize Baroque are the three trusted companions who'll accompany him in what may well be a suicide mission.

Illusions of Loyalty provides examples of the following tropes: