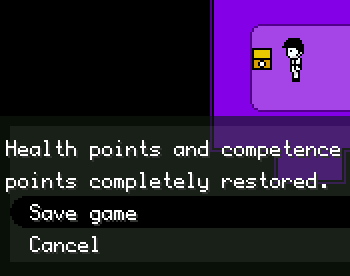 Reaching a Checkpoint or Save Point refills your Life Meter, Mana Meter, ammo, whatever. Once you get to the checkpoint, you'll be fully replenished and ready for the next level.

Sometimes this is just a part of the same mechanic that's saving your progress—this is common when saving at a Trauma Inn, for example. Other times, the save point or checkpoint won't heal you directly, but it will be surrounded by strategically-placed Healing Potions and Mana Potions or a convenient Healing Spring. In games with infinite or Meaningless Lives, these kinds of checkpoints just make sense, as the player could choose to get themselves killed for a free refill anyway. Aversion of this may lead to the game becoming Unwinnable as a result of saving at an unfortunate time.

Alternative Title(s): Healing Save Point, Save And Reload