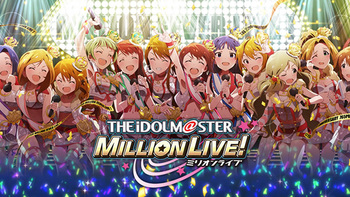 THE iDOLM@STER: Million Live! (アイドルマスター ミリオンライブ！ Aidorumasutaa Mirion Raibu!) is a 2013 video game by Bandai Namco Entertainment and part of the iDOLM@STER franchise, originally released on the GREE platform featuring the original cast of The Idolmaster, along with 37 brand-new idols to produce.

In June 29th 2017, a sequel to the GREE game called THE iDOLM@STER: Million Live! Theater Days was released for iOS and Android, which added Rhythm Game elements and full 3D graphics to the Million Live franchise along with two new idols to produce. The release of Theater Days eventually led to the shutdown of the original GREE game on March 18th, 2018, leaving Theater Days as the only entry in Million Live that is currently online.

An anime adaption of the game has been announced in July 2020 and will air in the Fall 2023 season.

The iDOLM@STER: Million Live contains examples of the following tropes: